The Bark Olbers, the ship on which Anna & Eliza Kleiboeker (sisters of Johann) came to America 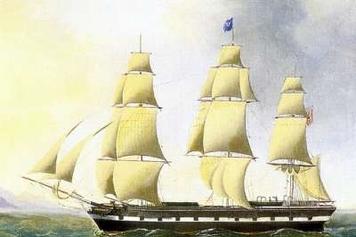 The transit time for the Europa which carried Johann Kleiboeker to New Orleans was 62 days.  The transit time for Anna and Eliza was 55 days, so even with the bad weather that blew them back to shore, it did not have a big impact on their schedule.  Following are some pictures from the 1850's of what the Kleiboekers might have seen as they embarked from their Ocean going "Barks" to the River Steamboats to head up to St. Louis, a 5 to 10 day journey.

New Orleans was also probably their first view of non-Europeans such as African Slaves and Native American Indians working and trading along the harbor of the City. By the 1850's New Orleans was exporting almost exclusively cotton, as the demand was high and the margins were great.  Sugar was now being mostly produced in the Caribbean, and with the opening of the Erie Canal, a lot of the agricultural exports from the midwest such as flour, pork, and corn was finding other routes to the US East Coast.

Clarence writes:   "Grandmother came from Germany in a sailing vessel to New Orleans and thence up the Mississippi River by steam boat when she was about 15 years old which would be 1853. She came with a brother and friends.  We have no knowledge of the brother .  The boys were sewn in the bedding of the ship and the beds were made up where the boys remained until the military authorities inspecting the ship for military duty runaways left.  After they sailed adverse winds blew the ship so close to England they could see the shore. She said her father often went from Germany into Holland to work."

Mildred writes:  "Grandma told me she came over from Germany when she was about 15 with a brother and some friends who were of army age.  She told me how they sewed the boys into the bedding and made the beds on the sailing vessel over them and they had to stay there until the military inspectors were off the ship and they had set sail and were a safe distance from shore.  It took them a very long time to get over as the winds blew them back until she said they could see the English shore.  She said her father often went to Holland to work."  Mildred never could understand why they came and landed at New Orleans.  She said they came up the Mississippi River by boat and one young girl was so despondent that she jumped overboard before they got to St. Louis.  She (Anna) worked for a Jewish family when she came and told how she didn't know that they used certain pots for just certain foods.  She cooked anything in them and they had to get all new pots.

Sometime around 1862 Johann H. Kleiboeker, writes a brief biography of himself entitled:  "Mein Lebenswandel" or in English, "My Walk of Life".  In it he states "I was born October 23 1830 in the community of Ruesfort, Kirchspiel Gehrde, Amt Bersenbrueck, in the Kingdom of Hannover.  Confirmed in year 1845 by Pastor Bock.  Emigrated to America the 18th of March 1851, landed in the port of St. Louis, Missouri,  June 4th, 1851".

After examining all ships leaving Bremerhaven within the dates that Johann’s “Walk of Life” states, I found an entry on a passenger list that I believe to be Johann’s record of making the Atlantic Crossing.  The Ship, Europa piloted by Captain E. Wieting, left Bremen on March 20 1851 and arrived New Orleans May 21, 1851 with a total of 160 passengers.  Within the Europa Records, there is an entry for “Joh. Hein. Bohke”  who is listed as 25 (Johann was 21) heading to New Orleans, which I believe is our Johann Kleiboeker.  He was traveling alone, which is consistent with Johann’s story.  Also, a clerk in New Orleans created this list who did not speak German and Johann did not speak English.   There is also a remote possibility that due to Johann's desire to not be conscripted by the German Military, he was not interested in telling people his full name or correct age.  This possibility arose due to a family story passed down by two grandchildren, (brother and sister) who are descendants of Johann's sister, Anna.  Anna made the journey with her sister Elisabeth in late 1854 from Bremen to New Orleans.   Clarence Hake, who was born in 1898, and Mildred his sister who was born in 1905 tell the following story about their grandmother Anna's journey to America:

View of the inside of an immigrant ship.  Most immigrants could only afford "Steerage" class, where very little food and water was provided.  There were bunks but passengers brought their own linens and blankets and straw mattresses.

Sailing ships were primary transport for the immigrants in the 1830-1860 timeframe. Ships sailing from New Orleans to Bremen were loaded with cotton and sugar, but originally were empty traveling back to the USA.  The shipping companies soon found it a good business to ship immigrants one way and cotton or sugar the other way.

When Bremerhaven first opened, passengers would have to travel the 30 miles down the Weser River from Bremen to Bremerhaven on crowded river barges, a journey taking three days, until they were brought to the side of their large sailing ship. The final stretch to the ship could only be taken during ebb tide, when water from the arm of the Weser flowed toward the North Sea. In the 1840s, a steam-powered tugboat towed barges to the mouth of the river, shortening the journey to a day.

Typical view of Bremerhaven Germany, the port from where so many emmigrants left.

Bremen, on the banks of the river Weser, was founded in the 9th century and was a leading member of the Hanseatic League, and early trade association of northern European cities. But the Weser became silted up and was no longer navigable. So in 1825, Bremen’s mayor purchased land 30 miles down river, where the Weser River meets the North Sea and built a new harbor.  This new port became Bremerhaven and received its first ship in 1830, the American schooner Draper. 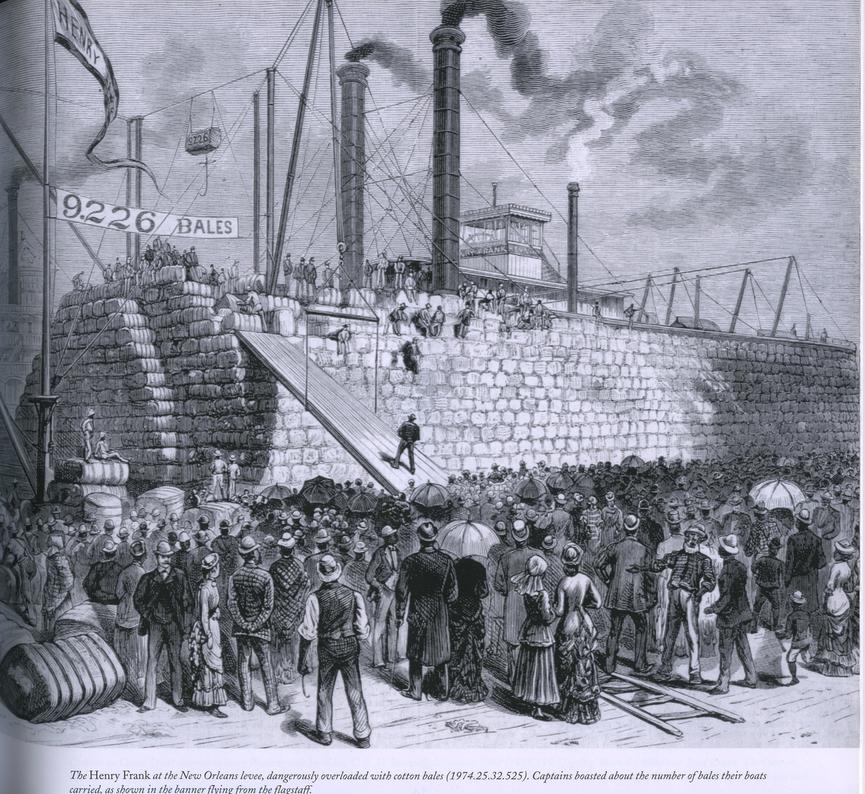 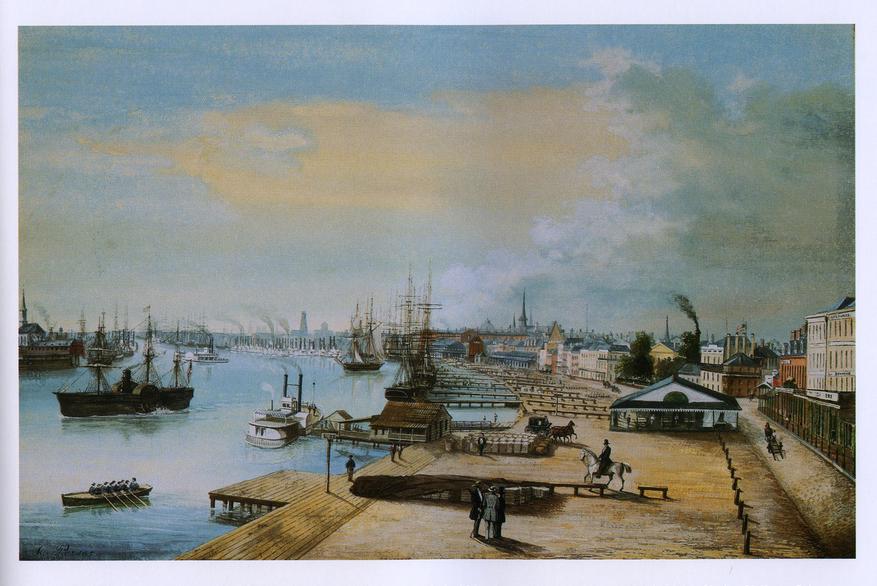 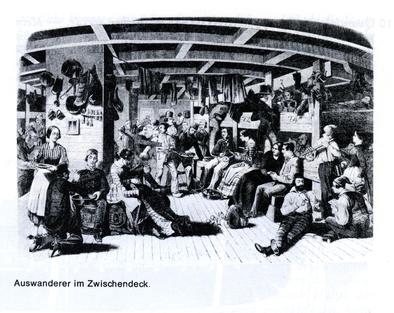 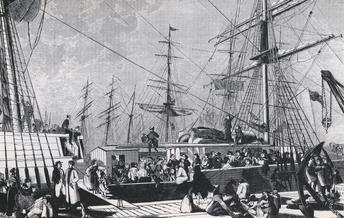 Above: This View of New Orleans from 1858-1859 shows cotton bales waiting to be loaded on the levee in front of the French Quarter.  Immigrants came off the sailing ships and cotton went back on.

Above: View of New Orleans in 1853.  Note that the Ocean going sailing ships were not much bigger than the Riverboat Steamers.  The sailing ships were pulled by the steamers up river from the Gulf of Mexico to New Orleans. Once in New Orleans, the passengers were processed, lists were made and immigrants transferred to the paddle wheelers heading up river to St. Louis, Cincinnati and other cities.