Above are examples of tickets given to the strawberry pickers when they turned in a full quart, tray (flat) or crate to the strawberry shed near the strawberry fields.  The pickers held on to these tickets until the farmer took the strawberries to the train station in Pierce City (and in later years, Monett) and was paid.  Once the farmer had the cash from the strawberry buyers, he could then pay his workers, who exchanged their tickets for cash.  Many family members, especially the children may have received tickets, but did not get paid, as they were expected to contribute their labor to the family income. As Doris (nee Lampe) Schnelle remembered, when she picked berries for both August and Alvin:  “They gave you tickets showing how much you picked at the end of each day, and at the end of the week you turned them in for money, but you only turned them in if they paid you!”  The A. H. Kleiboeker ticket above was in a teapot that was August's wife, Hulda's.  Their daughter, Evelyn, kept that teapot on her window sill after her parents passed away.  The teapot ended up with Evelyn's daughter, Jane Mayden, and the almost 100 year old strawberry ticket is still there.  The Charles Herman tickets were found by June Huff and Anita Breazeale at their family home, the former home of August and Hulda Kleiboeker.

That may be why these rare tickets recently were found in 2020 and apparently never cashed as they were either given to children who didn't get paid, or work donated to neighbors without ever being cashed.  Charles Herman lived across the road from August (A. H.) Kleiboeker and raised strawberries, as did so many Lawrence County Missouri farmers at that time.  What made them rare today is perhaps the story Karen Kleiboeker told.  Karen remembers when her dad Alvin, who was also a strawberry farmer, found a bunch of old Strawberry tickets.  Alvin immediately wanted them thrown away, as he told Karen that they represented a big liability, if someone found them and tried to claim they were never paid for their hard work. 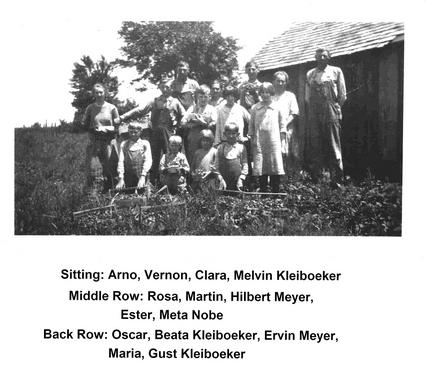 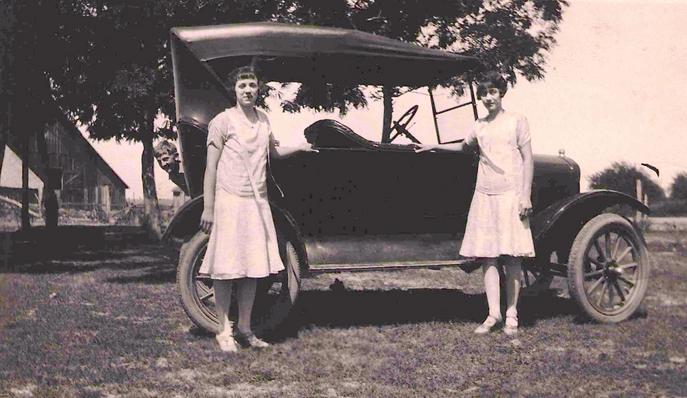 ​"This type of crate was used through most of the period when berries were shipped from SW MO. The crates came disassembled and were nailed together at the patch.  A crate consisted of two bottom pieces, two sides, two ends, a lid and two separators placed over each layer of berries.  A crate held 24 boxes in three tiers of 8 boxes each."  Photo and description courtesy of the Lawrence County Historical Society, Mt. Vernon, MO 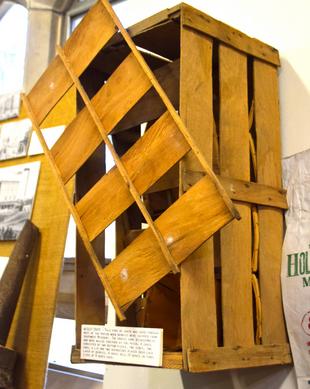 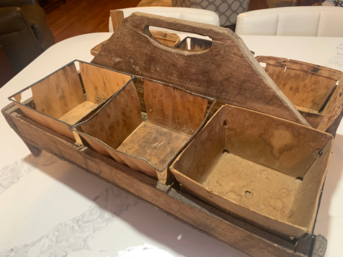 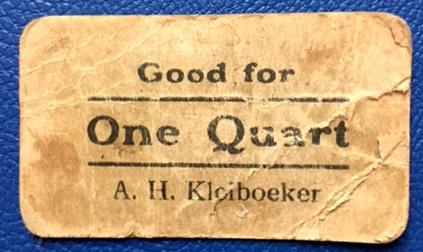 The strawberry pickers picked a quart of berries at a time, and put 6 quarts into a flat or tray, shown here.  And it took 4 trays to make a crate.

Elda and Leona Kleiboeker, at their family farm with the 1925 Model T bought with cash generated from a bumper crop of Strawberries that year. Car was purchased new in 1925 from Irwin Groh of Freistatt, MO. Picture taken probably between 1926 and 1929.  Elda born in 1907 and Leona born in 1910 make them around 16-19 years of age.  Peeking around the back of the car, is Walter Kleiboeker, their first cousin who was also born in 1910. 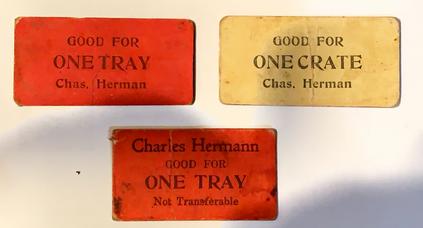 "Martin and Elda were good drivers and learned the operation quickly.  August was more horse oriented than mechanical, and when he said "Whoa" the car wouldn't stop.  The first day when he drove the car into the second floor of the basement barn where the buggy and wagon were parked, he ran into the wagon and knocked out the car's headlight."

"As the younger children grew, they became more involved in the farming chores, among them picking strawberries.  To make picking berries less tedious and more interesting they would write their name, address, and the words  “write to me” on the bottom of the crates hoping for a pen pal.   Some of the berries picked by Lorene were transported to Seward, Nebraska.  One day a lady purchased some strawberries to make a dessert at her restaurant.  It happened that her daughter, Wilma, was helping her make the dessert and noticed the words “write to me” on the bottom of the box.  Wilma asked her mother if she could write to Lorene and she said “yes”.  This was the beginning of a lifelong friendship.  Lorene and Wilma found out that they were both Lutherans and would soon be confirmed in the spring of 1934.  They were both so excited and referred to each other as “My Strawberry Box Girlfriend”.
Their friendship was a happy and important part of their lives. They kept writing to each other during their adult years and sent each other strawberry items from time to time.  They were still exchanging letters in the 2000's.  They both gave thanks to Our Heavenly Father for blessing their friendship and for His hand in finding each other."

In addition to Alvin's great story, Lorene and Vera told us that they often wrote their name and addresses on the bottom of the strawberry crates and asked for people to become their pen pals. Here is Lorene's story about her pen pal from those berry picking days.

From left, the Kleiboeker sisters: Vera, Lorene, Meta and Leona all with quarts and flats of Strawberries in their hands.  Brothers Martin and Hubie Kleiboeker in front.

The following is from Alvin Kleiboeker, August's son who had a great memory and wonderful stories.

"The family ventured into Strawberry Farming in 1924 planting four acres near the old Wormington home site which had belonged to the Crook Farm.  The Crook's had sold the 4 acres to Wormington because Wormington's chickens would eat the wheat in the (Crook's) field.  August bought the Wormington farm and the four acres from the Crook farm.  The four acres juts out on top of the hill.  Strawberry plants were obtained from Louie Fieker (brother in law of August Kleiboeker).  Planting of the strawberries was done by hand with the use of a dibble.  The first summer the strawberry plants were almost lost to ragweeds. "Father Jack" who lived in the Wormington house and his son Henry Burns pulled the ragweeds and hoed the strawberry plants, saving the strawberries.  In 1925 the year of the first crop, a late frost occurred after the berries had bloomed.  A fire was built with logs and straw so smoke would cover the field in an effort to prevent freezing the blossoms.  August checked the field the next morning and found a lot of black blooms.  Even with the frost damage a good crop was harvested.  Strawberries were picked until late June and the family enjoyed strawberries on the 4th of July.  The family spent long hours in the strawberry patch. Elda, Leona, Martin, and Alvin picked berries.  Meta cared for Lorn, who had been born in November of 1924.  Vera, Lorene and Hubert were still small children and stayed near the berry shed.  Aunt Mary Kleiboeker, Aunt Beata Kleiboeker, and Rosa Meyer, niece of Mary and Beata were reliable strawberry pickers.  Pickers were paid three cents a quart to pick the berries.  Mary, Beata, and Rosa were given an extra tip for their efforts.  It was possible for an individual to pick four crates a day, 24 quarts made a crate.

Elda and Leona did most of the sorting and crating of the berries in the berry shed.  During berry picking time a family by the name of Hayward was living in the Wormington house.  They had traveled from the state of California in a REO truck.  The Hayward family helped pick the berries and Mr. Hayward transported the berries to the Pierce City Railroad depot where the berries were shipped. The crates were marked with the producer's name.  The shed man at the railroad depot would check the berries for condition - not too ripe and not too green - before they were loaded into a refrigerated railroad car.  The average price of a crate of strawberries in 1925 was $5.00. The family made $2000.00 in 1925 from their strawberry crop shipping 125 crates on one day.  After the strawberry picking was completed the one bottom 14-inch horse drawn plow was used to throw dirt on the plants and then it was harrowed back to narrow the rows.  The next year the strawberries produced again. The original four acre planting produced for three or four years.

Martin planted two patches of strawberries totaling three acres in 1934-35 south of Center Creek in the area where Uncle Gustav Kleiboeker later built a home.  The Holle kids picked for him.  Alvin had strawberries in the original strawberry site, the Crook's four acres from 1940-1944.  Clara Kleiboeker Smith, Emma Weihe and Frances Weihe were his good standby pickers.  in 1944-45 Alvin rented two plus acres of the Frank Bracht farm east of the Worm farm he had rented and where his family lived (Lawrence 2180).  The Bracht land was one-half mile south and 1 3/4 miles west of Freistatt.  The land was on the north side of the road on top of the hill.  From 1945 to 1949 Alvin had two acres of strawberries on the Worm farm which was 1/2 mile south and and 2 1/2 miles west of Freistatt on the hill south of the house.  Migrant pickers during strawberry picking season stayed in the garage behind the house.  Irma Stellwagon Kelly was a good steady picker for Alvin.  In the later years of strawberry farming, Alvin belonged to the Monett Strawberry Association and the berries were shipped from the Monett Railroad depot.  Louie Kruger hauled the berries to Monett.  One year Alvin cleared $1100.00 on the strawberry crop.  Strawberry farming involved tedious backbreaking labor in the hot sun." 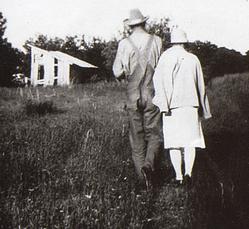 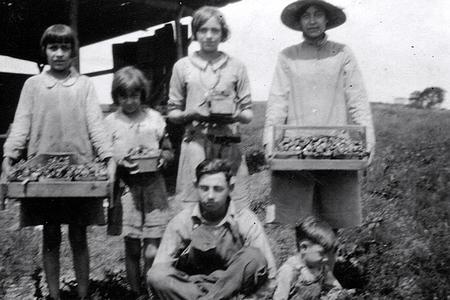 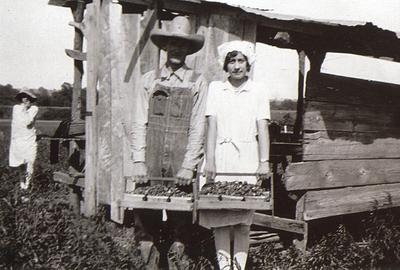 Strawberry Picking on the 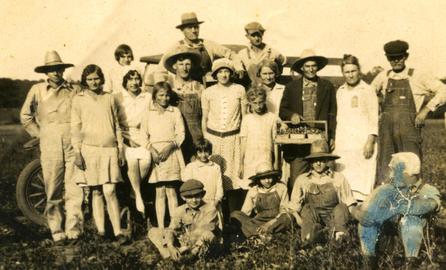