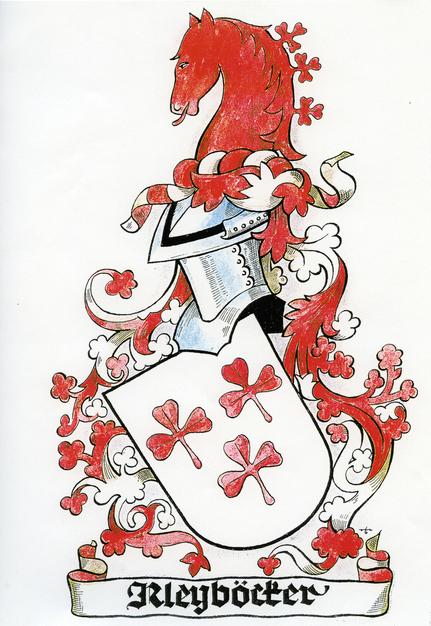 Here is the Kleyboecker Coat of Arms on the side of the main house at the original Kleyboecker Farmstead of "Hof".  Earlier, when many people could neither read or write, the Coat of Arms was a convenient way to identify a farmstead, or articles owned by the Hof or the Hof owner.  Clearly symbols of clover called "Kley" in German helped people remember the name Kleyboecker. 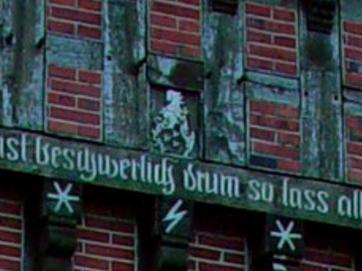 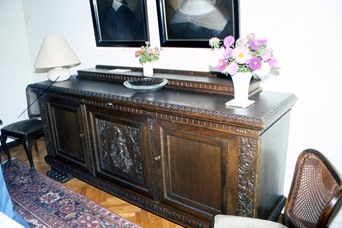 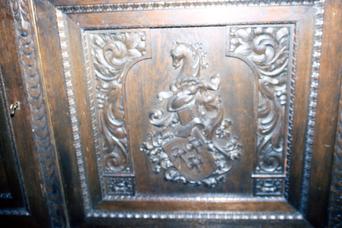 There are many different origins of German surnames, but they fall mainly in 5 categories: 1) patronymic surnames (first name of the father, eg Peterson, Peters), 2) surnames based on origin (town, region) 3) location of the house or farm, 4) occupational surnames, and 5) descriptive surnames.

The Kleyböcker family name is based on the location of the original family farm northeast of Osnabrueck, Germany.  The “Kleyböcker” Hof or farmstead is located near the farming hamlet of Hinnenkamp near Voerden, Germany.  In this agricultural region family names were often associated with the farmstead or “Hof”.  In fact, if the Hof was inherited by someone with a different name, the new family would take the name of the Hof and drop all references to their former family name.  Owning land meant more than family heritage in those days.  In this part of Germany, a Hof was handed down to the next generation via the youngest male in the family.  If a male heir was not available due to death or previous marriage, the Hof would often pass to a daughter and her husband.  At that time, the husband would then change his name to the Hof name.  So the name of the Hof was more important and lasting than many other family names.

The following historical facts and description of the Kleyböcker Hof are from a German history book of the area, (Karl Willoh: Geschichte der Katholische Pfarreien im Herzogtum Oldenburg, [History of the Catholic parish of the duchy of Oldenburg] page 143).

The name of the Hof in Hinnenkamp: “Kleyböcker” was derived from the characteristics of the Hof / farmstead, not a single person’s name.  The land of the Hof was "kley" or “kleiig” (clay-like) or “schwer” (heavy) and filled with “Boeken” (Buchen in high German today) or beech trees.  The sapwood (the wood closest to the outside layer of bark) of Buchen or Beech trees were peeled off the trees and used to make pulp for paper since the middle ages, and that is why we have the term “book” in English which originated from the source of paper for written materials.

The first mention of the Kleyböcker Hof in any written historical record is from the first half of the 15th century when it was mentioned in the record books of the Bishop of Osnabrueck, but it is believed to be older than that.  In 1370 Voerden, the small village where the Hof is located, was designated as a Stiftsburg, which means it was dependent on the protection of the nearby bishop or prince.  In 1378, a law was passed that encouraged people to settle there within the village of Voerden by giving them 10 years of tax free living if they built up a farmstead.  After the 10 years, they were then expected to provide the normal 10% of their income or crops to the reigning prince or bishop who was in control of Voerden.  It is assumed that this encouraged the original family to settle in Hinnekamp / Voerden. Over the years, due to the inheritance laws permitting only one son to inherit the Hof and not split up the land among other descendents, many different Kleiboeker families worked alongside the Hof-owning Kleiboekers at the original Hof as well as settled and married in the nearby towns of Neunkirchen, Quakenbrueck, Bramsche, and Gerhde.

Some Symbolism in this Coat of Arms:

1.  The horse on top of the coat of arms is probably there as the horse (a white one) was always used to symbolize the Province of Hannover where Voerden is located. (now Hannover is referred to in Germany as Lower Saxony or Niedersachsen).

2. Clover:  it appears that clover leafs show up prominently on this coat of arms.  The word clover in German is “klee” which is related to klei or clay as well, as clover is often used to mitigate the effects of clay-like soil.