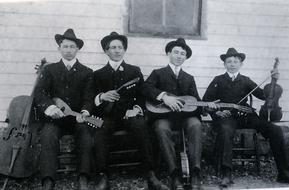 Here is Sam Osterloh's research into the Violin shown above and his father's Orville Osterloh's recollection of some stories related to the musical Kleiboeker brothers.

The violin is a Giovan Paulo Maggini copy, probably not an original.  I think all of the originals are accounted for.  Maggini died in 1630 and the violin is too short to be a Maggini (original Maggini’s were 14 and 3/8 inch or 14 ½ inches.  Most copies were set to standard 4/4 or 14 inch, which is the general length of this violin, maybe a little longer.)  In addition, Maggini did not mark the inside of his violins with a tag as this one has.

This violin has a tag that says “Giovan Paulo Maggini brefcia 16…” and then there is what looks like a stamping that I think says ’96.  There are examples of others online indicating a similar marking and a stamping of ’95.  There are several German violin luthiers who made Maggini copies that are of some worth, including Lowenthal and Moritz.  But most of these actually carried the luthiers’ name and sometimes the Maggini name as a copy.  Some of these are worth in the $3000.00 range depending on authenticity and condition.  An original Maggini violin would be valued anywhere from $200,000 to over $2,000,000.  The Kleiboeker violin was most likely made in a German factory workshop and either exported or sold from the homeland.  Likely, thousands of these violins were made and probably sold in the States for around $10.00.  In market today, they may be worth $300 to $400, making it three to four times its original value given inflation.

My personal opinion is that the ’96 means it was made in 1896, the ’95 meaning the violin was made in 1895, and so forth.  This dating could generally match a theory of the history that we know, that Gerhardt (Edward’s Uncle) [Johann H Kleiboeker's brother] gave the violin to Edward, who was born in 1871 and in 1896 would have been 15.  Note: Both Gerhardt and Edward lived near each other in Illinois from Edward’s birth until the Johann H Kleiboeker family (which included Edward) moved to Freistatt in 1884, when Edward was 13.  Gerhardt immigrated to New Minden Ill in 1864 from Germany and died in 1908 at the age of 65.

Orville Osterloh (Edward’s grandson) who is still living in 2017, has often said that he thought Gerhardt got the violin in St. Louis maybe a pawnshop, but I think this is conjecture.  However, if that is the case, it would seem the violin would be older than 1896, but then again maybe not.  We simply don’t know how long Gerhardt owned the violin prior to giving it to Edward.  I’m wondering if any of you have further stories or insight that could fill in some of the blanks?  Did Gerhardt play an instrument?  How long did he own the violin prior to giving it to Edward?

Orville has told me that the Kleiboeker boys [Sons of Johann H Kleiboeker] played in a band here in Freistatt, Edward playing the fiddle and Henry playing the bass fiddle.  One story goes that Henry’s bass fiddle broke into a thousand pieces when it went flying out of a buggy after a dance one night.  I’m wondering if other brothers and sisters played instruments, like guitar?  Orville says the band played for dances and played old time country music, like “Under the double Eagle” (which was written in 1903), “Over the Waves”, etc.  However, when Pastor Bernthal arrived, he preached a gospel of “dancing being sin” and while the boys still played, they no longer played for dances and such.

[Note: Reverend C. Bernthal was installed as Pastor of Trinity Lutheran in 1919.  Also note that Prohibition went into effect in 1920 until 1933.  Also, WW1 (1914-1918) caused significant Anti-German hysteria, and the Freistatt Germans were probably encouraged to keep a low profile during and immediately after the war.]

Orville remembers Sunday afternoons at Edward (his grandfather) and Emma’s house, where he spent the afternoon begging Edward to play.  Finally, Edward would pick up the fiddle and play a few tunes.  Orville describes that Ed liked the fiddle, because the fiddle was the “lead” and Ed liked to be the leader.

The last person to really play the fiddle is Chery, my wife.  I’ve reconditioned it at Orville’s request for the reunion and hope you enjoy looking at it.  As I said before, if anyone has further stories surrounding the fiddle or the band, please email me at sam.osterloh@uscm.org.

Blessings on the Kleiboeker Family

Guitar handed down from Gustav Kleiboeker to his son Melvin, then to his daughter Cheryl Brown

Walter carries a guitar and Erwin the violin.

Clearly the musical tradition is carried on here in the next generation of Kleiboeker's.  Oscar was the youngest of the Kleiboeker brothers (Ed, Henry and Gus) mentioned at the top of this page.

From various family stories and sources, we have learned that 3 sons of Johann Kleiboeker learned to play music on various instruments.  Ed on Violin, Henry on String Bass, and Gustav on Guitar.  Whether or not they played as a small band or part of the larger Freistatt Band is not clear. The time frame during which they played together was most likely 1895 to 1902 when the 3 boys were around 15 to 27 years old. (Ed and Henry lived together on a farm they rented and managed themselves with the help of a hired hand, Henry Nobe who also lived with them, per the 1900 Census).  Henry gets married in 1902 and moved to Mounds OK in 1904, and Ed is married in 1901 and moves to Herkimer Kansas between 1905 and 1910, so the brothers were clearly no longer playing together after 1904. 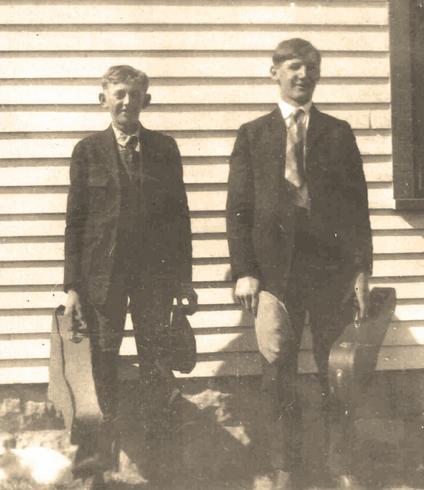 Schwaller Band from Westphalia MO about the same era that the Kleiboeker brothers were making music.  Note the mix of instruments.  Smaller towns like Freistatt did not always have the ability to have large orchestras, but good German music was kept alive by such groups. Photo from Western Historical Manuscript Collection, Columbia, MO. 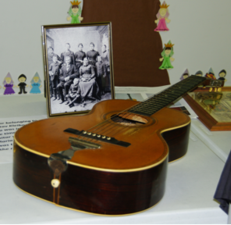 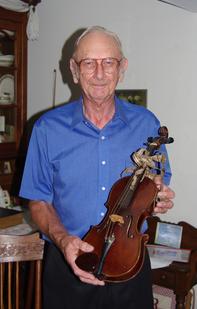 Ukelin that Henry owned later in life, after the demise of his String Bass (see story below), now owned by Anne Crowell, grandaughter of Henry

Here, Orville Osterloh holds the 1896 German Violin given to him by his grandfather, Edward Kleiboeker, picture taken in 2009.