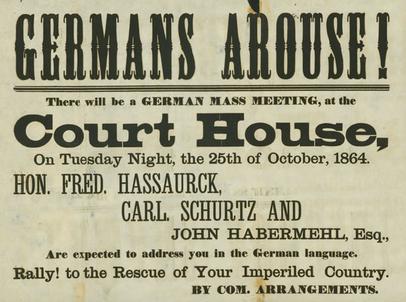 Consolidated List of all persons of Class 1, subject to do military duty in the first Congressional District, consisting of the 4th through 10th Wards of St. Louis City and St. Louis Township North of the Manchester Road to St. Ferdinand and Central Township in St. Louis County, State of Missouri, enumerated during the month of July 1863 under the direction of Captain Charles D Colman, Provost Marshall.  John is listed here as a "Clerk", age 33, as he was a salesman at that time for Koppelmann Furniture in downtown St. Louis, MO.

John Kleiboeker was 30 years old when the Civil war broke out in 1860.  The 1860's were not good years for John.  He lost his first wife, Henriete Willemina Brinkman on July 13, 1860, when she was 25.  The only child of John and Henriete, Elizabeth was born September, 1859.  John then remarried in Feb of 1862, to Charlotte Stratman.  They had their first child, Anna Henriete in May of 1863, but Anna only lived for one year and died in August 1864.  John and Charlotte eventually had 7 other children, all living to adulthood.

On March 3, 1863, the US Congress passed the Enrollment Act, also known as the Civil War Military Draft Act. This was the first of 4 drafts issued between 1863 and 1865, which registered over 3 million males during those 4 drafts.  Those registered were split into three different classes.  Class One, which included John Kleiboeker, are for those aged 20-35, whether married or not, and those 36-45 that were unmarried.  Class Two was everyone else that were registered but not currently in the Military.  Class Three included those who were serving in military units at the time of the draft.  There was a quota of individuals to be enrolled by each Congressional District, administered by the Provost Marshall Organization.  This Organization then set up Enrollment Boards within the districts to conduct a census to document every man eligible.   So John was registered for the draft in July, 1863 as a Class 1 person as shown below.  But he was never called to serve as they had sufficient volunteers within Missouri at that time.

“Charles Gerstkemper is a native of Minden, in the Province of Westphalia, Prussia.  He was born September 9th,1840. He is the fifth in a family of eight children. His father emigrated to this country in 1857, and settled on the North Prairie, now known as New Minden. He died in 1859.  The mother is still living on the place where she first settled on her arrival in this country. After the subject of our sketch reached his fourteenth year he was apprenticed to the trade of wood-turning. He continued so engaged until his twentieth year, when the war broke out. He promptly enlisted on the 8lh of August, 1861, for three years in the 10th Regiment Missouri Volunteer Infantry. His regiment participated in all the hard-fought battles of the siege of Corinth, IUKa, Second Corinth battle, Jackson, Mississippi, Grenada, and others. He was severely wounded at the battle of Jackson, and was taken prisoner while in the hospital. After his release he rejoined his regiment at Bridgeport, Alabama. His time expiring soon afterward, he returned to St. Louis and worked at his trade for one year, when he purchased a farm near Hoyleton, and removed to it and commenced its cultivation, and at which he continued until the 2d of December, 1876, when he removed to Nashville to take the position of deputy under Sheriff May. After the expiration of Sheriff May's term of office he accepted the same position under Sheriff Lane.  On the 23d of November, 1867, he married Miss Minnie Rabenneck, a native of Germany, but a resident of St.Louis at the time of the marriage.  Five children have been born to them, three of whom are living.   He is a republican in politics, and cast his first vote for Abraham Lincoln in 1864, and has voted that ticket to the present.  Both he and his estimable wife are members of the Lutheran church. In 1870 he was elected Justice of the Peace, and re-elected in 1874, and in 1876 resigned the office to accept the office of deputy sheriff, which he now holds and fills to the acceptance of his numerous friends.” 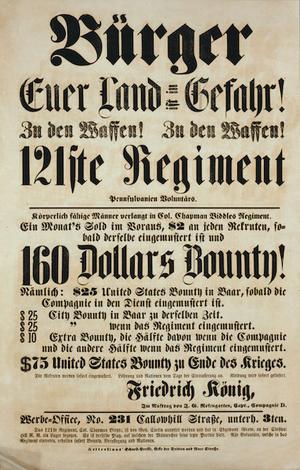