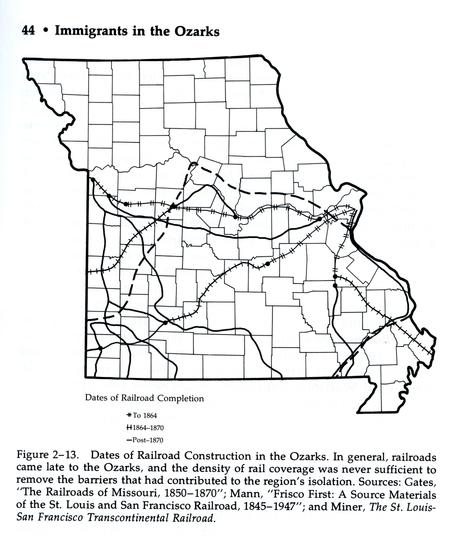 Two primary groups of Germans settled the Lawrence County / Freistatt area. Germans from the eastern part of Germany (Pommern and Posen) immigrated via NY to the Great Lakes Region and settled initially in the Milwaukee area and later throughout Wisconsin and Minnesota.  The second group were from the Osnabrueck region (within the kingdom of Hannover / Lower Saxony) and settled in St. Louis and eastern Illinois.  Both these groups were attracted by the offer of land at $6.00 per acre being issued in the 1870's and 1880's by the St. Louis and San Francisco Railway, later the Frisco Line.   The railroad arrived in Pierce City for the first time on June 11. 1870.

Reverend Fred Fieker was the minister at the German Evangelical Church, now named Zion United Church of Christ, located at the northeast corner of Lawrence 2150 & Lawrence 1080, southwest of Mt. Vernon MO.  The Fieker family is related to the Kleiboeker's as Johann Kleiboeker's first daughter from his first marriage, Elisabeth, married Louis Fieker.  They are both buried in the Zion Cemetery next to the church.  Also of note, the bell in this church was originally in the German Evangelical Church of Hoyleton IL, showing the close ties between this southwest Missouri settlement in the 1880's and the Washington County, Illinois Germans where they came from. 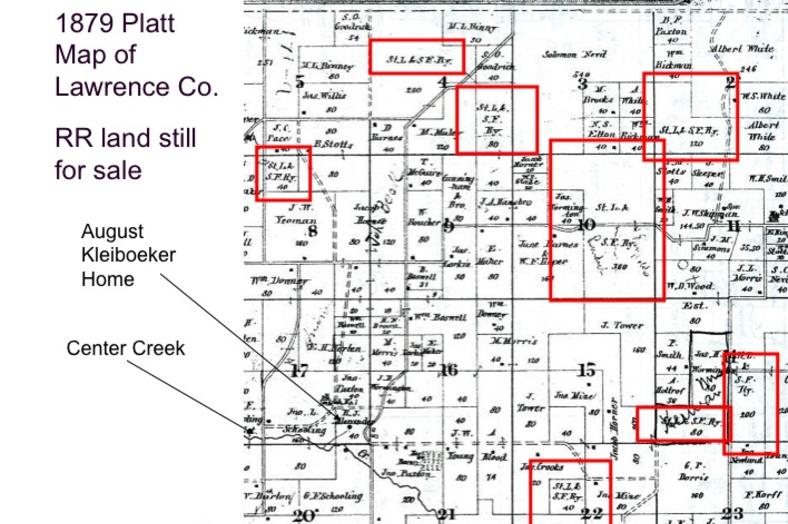 Read more about the Germans in Lawrence County written by Rev. Fred Fieker by clicking here

The Freistatt and fertile Spring River valley was settled soon after the arrival of the railroad.  Pierce City was founded in 1870, and the railroad arrived there the same year.  Around Christmas of 1873 a group of Germans from Minnesota and Wisconsin arrive in Pierce City on the train.  David, August, and John Fritz, Louis and Gottlieb Krueger, Wilhelm Zemke, and Ferdinand Mahlzahn and their families were the first Germans to arrive and establish farms in the area.  There were wide open spaces along the Spring River on the east, plentiful forests to the south, and access to markets via the new railroad depot in Pierce City.  Initially the first worship services (called Lesegottesdienst) were family affairs held at the homes of the new settlers.  At times, and ordained itinerant pastor conducted services but most times the services were led by a layman reading from the Predigtbuch (German prayer book).  They all shared a common first language, German, although many spoke English fluently and they all shared their deep adherence to the Lutheran faith.

At one of these early Lesegottesdienst on September 8, 1874, a formal meeting was held with the purpose of organizing a congregation and to call a pastor.  Rev. H. F. C. Grupe arrived in April 1875 and the first church building was dedicated April 11, 1878.

The Kleiboekers left Hoyleton IL in 1884 and arrive in Freistatt, which by this time is a strong growing community of German Lutherans. By then, Freistatt already had built their second Church and the original church building was now a day school with a full time Lutheran trained teacher, H. Nehrling.

An 1888 edition of the "History of Lawrence County" describes Freistatt as follows:   'On the southeast half of the Spring River Prairie is located the famous German neighborhood, which is now fast becoming the most populous and wealthy district of its size in the county not withstanding that fifteen years ago it was said that a man would starve to death on the very prairie which is now adorned with some of the handsomest homes in the county and produces thousands of bushels of wheat, oats, and corn and many tons of hay'

Land sold by the St. Louis and San Francisco Railway drove most of the German Immigration to Southwest Missouri