I met Clint Claybaker recently on a trip to Springfield MO in December, 2017. My cousin, Nolan Kleiboeker introduced me, and he mentioned that Clint's name was so similar to our family's that maybe there might be a relationship.  Clint mentioned that he had a relative who had done quite a bit of family history research.  From that research, Clint had read that one of his distant ancestors had spelled his name the same way as we do.

Clint was kind enough to send me the research done by his Aunt and l was intrigued to find that the Claybaker ancestor had the name of Johann Heinrich Kleiboeker and immigrated to America in 1834.  This JH Kleiboeker went by the name Heinrich, ("Henry" here in the US) and was born in 1801, almost a generation earlier than our immigrant ancestor, Johann Heinrich Kleiboeker (1830-1900), who went by Johann / "John".   I was able to find Henry's passenger record (see here) and it clearly states he originated in Neuenkirchen Germany, the same small village where our Kleiboeker family came from.  Unfortunately, the local Vörden church near Neuenkirchen burned down in 1747, and we lost many records.  Initially in early 2018, no paper trail had been found that ties the Claybaker and Kleiboeker families together.

But luckily Nolan's father, Lorn had agreed to a Y-DNA test which can track male lineage of the Kleiboeker Family.  I asked Clint if he would also have his Y-DNA tested and Clint agreed.  In April 2018, the results came back and we had an exact match of 37 attributes in both of their DNA!  The following chart shows the DNA results and the probability of which generation before Lorn and Clint is their most recent common ancestor. 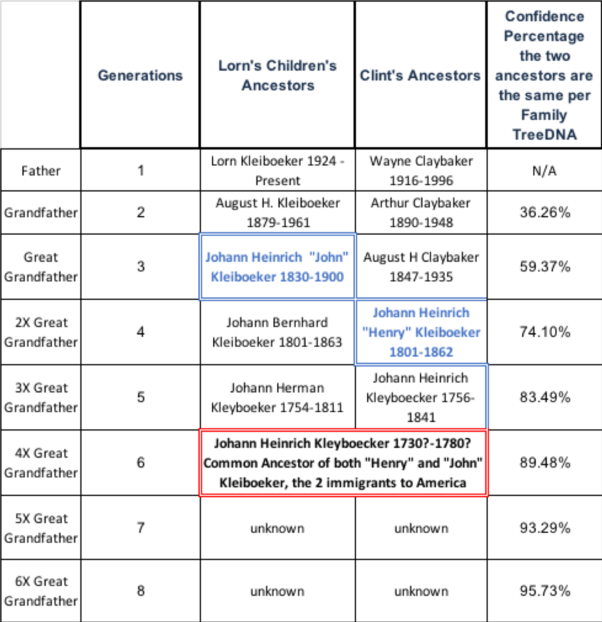 The middle two columns in the chart below shows known relationships based on paper records from various archives and family files at the time of the DNA test.  The far right column shows the probability or "Confidence Percentage"  from the DNA testing that the two ancestors shown in that row are the same person.  Clearly the first 4 rows of ancestors which we know to be different people, are shown with lower probabilities.  So this helps in further archival research to find the most recent common ancestor.  The DNA testing points us to either the 5th or 6th Generation back as the most likely common ancestor between these two lines, 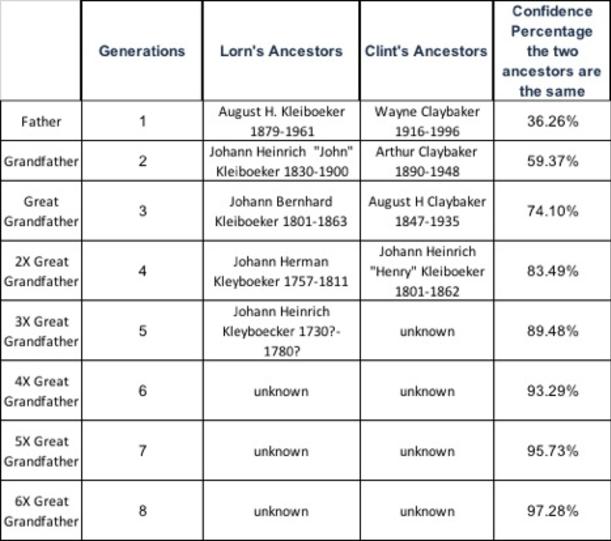 This second chart below now shows the results of finding Kleyböcker birth records in Neuenkirchen in late 2018, after the DNA tests were made, that correlated with the DNA testing.  The family birth records of Henry Kleiboeker was the key and was found in an online database of a local family history association in Neuenkirchen, Germany.  The DNA tests stated the probability of Henry's grandfather being the most common ancestor at 89.48%.  And that turned out to be the correct answer.  "Henry"'s first cousin, Johann Bernhard Kleiboeker is "John" H Kleiboeker's father.  So one Kleiboeker, Henry starts the Immigration chain in 1834 and the next generation, John, who must have heard stories of Henry's experiences, decides to immigrate to St. Louis in 1851.  More can be seen on Henry's story of coming to America here.  And John's story is here.