Johann Heinrich Kleiboeker wrote his own mini-biography in 1860.

On October 17, 2008, D. Kruse met with Cheryl Kleiboeker Brown (daughter of Melvin Kleiboeker, who was son of Gustav Kleiboeker, Johann's son).  Cheryl had a box of documents (appeared to be a cigar box) originally owned by Johann Heinrich Kleiboeker.  The most amazing piece of paper in the box was a handwritten note in German script, written by Johann of his life history in his own handwriting, using19th Century German script.  Here is an English translation of the note:  The following images show it in its original form, handwritten by him.

"My walk of life.   I was born October 23 1830 in the community of Ruesfort, Kirchspiel Gehrde, Amt Bersenbrueck, in the Kingdom of Hannover.  Confirmed in year 1845 by Pastor Bock.  Emmigrated to America the 18th of March 1851, landed in the port of St. Louis, Missouri,  June 4th, 1851.   Apprenticed starting June 7th 1851 with master(meister) furniture maker (meister was a term used to define the person from whom the apprentice learned) John H Koppelman in St. Louis Mo.  I was in apprenticeship with him until June 7th 1854, then after my apprenticeship I worked as a journeyman at John H. Koppelman Furniture until Septermber 18, 1855.  On this date, I accepted a position as Salesman at the Furniture Store at No. 157 Franklin Ave owned by Johh H. Koppelman and Co.  March 18, 1858 I was honorably united in marriage with Henriete Willemina Brinkman by Pastor Picker.  On September 27, 1859 my wife presented me with a little daughter.  On the 13th of May she was baptized by Pastor Schrenk at 14th and Madison [in St. Louis].   July 13th 1860, is the day my beloved spouse died.  She suffered much with high fever and for 9 days of discomfort departed honorably and was released of her affliction.  Henriete Wilemina Brinkman was born on November 16, 1834 in Oberdisen by Bielefeld, Kingdom of Prussia.  She is buried in the Cemetery of the Holy Ghost in site number 2433.   "Here in God's quiet garden awaiting her beloved spouse". 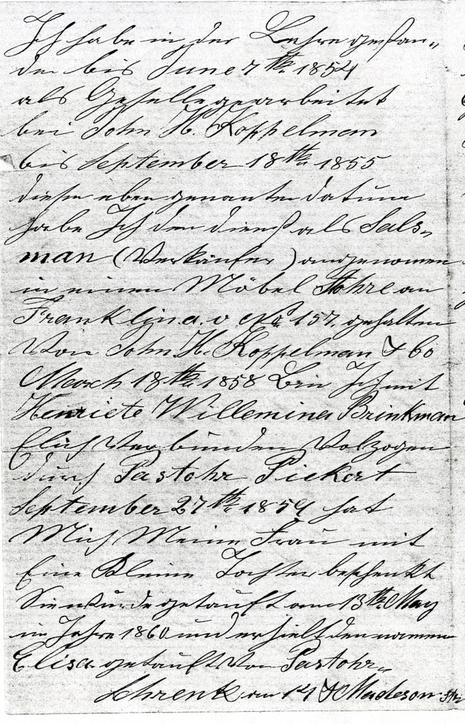 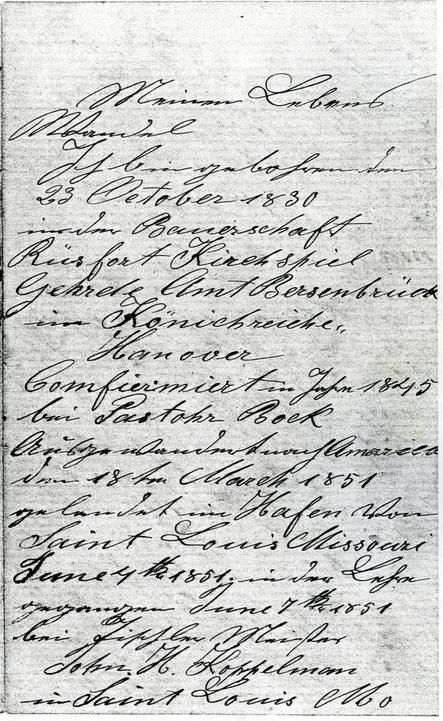 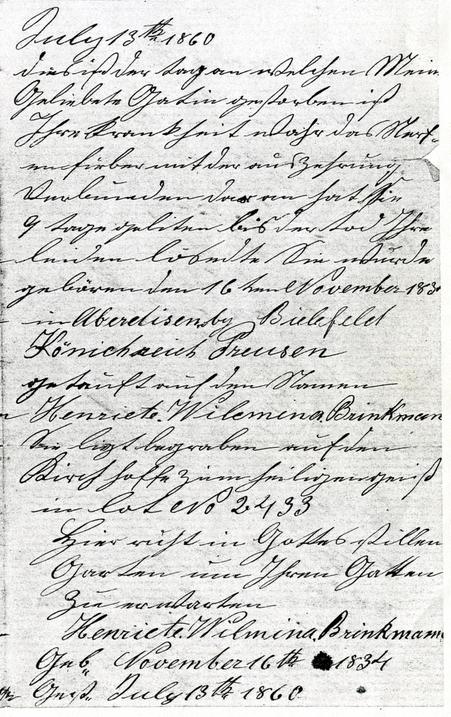 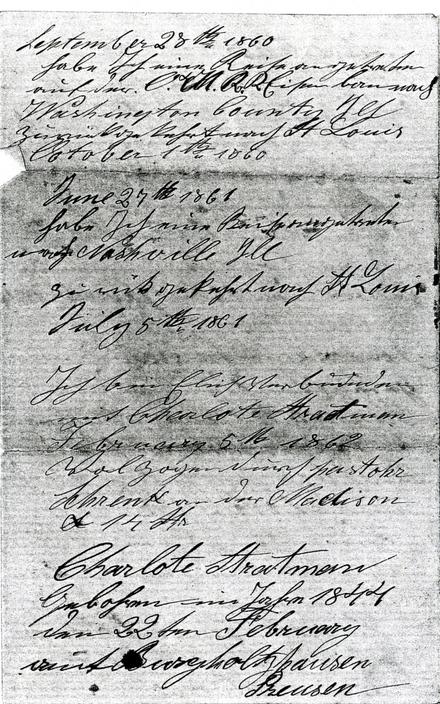